I have been preparing a little treatise on an introduction to “our actuality” – the fact of our reality (which itself is made of parts including our self or identity, what we experience, consciousness, deeper being) as a projected part of our Whole Being, projected through the brain and spinal cord (or CNS). “Orientation”, of our projected actuality, in space and with our Whole, establishes our representational reality as part of our Whole, Who in turn is a part of Reality (absolute) or the One-and-only-Whole (see elsewhere in this blog). For this Noam Chomsky’s linguistics and history of science and philosophy, as well as various descriptions and thoughts by others on emergent phenomena has been particular considerations for the last month or so.

I was noticing a comment on Daniel Everett’s work (linguist who lived and worked with some South American natives, initially as a missionary and subsequently converted from Christianity), which questions the recent views of language as an innate and universal human property (generative grammar originated by Chomsky). In contrast Everett considers us moulded by culture (and language) and, as Aristotle described, the mind as a blank slate rather than preset. What really took my attention, however, is the Buddhist and Hindu concept of “anatman” that Everett considered most compatible with the notion of the human self.

I take a sidestep from my recent activities and comment here on this and other Sanskrit terms with Orientation and reference to our representational reality (or indirect realism) within which we, as self or identity, identify directly with what we experience of perception and thinking, our sense and notion, as if they are real (naive or direct realism). 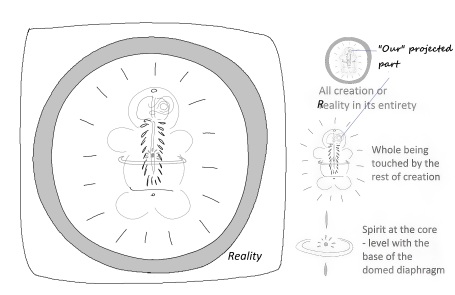 Atman is translated Self or True Self, and Brahman God. I have come to appreciate the terms and phrase in this way : Atman is the Whole Self Who is of Reality. Brahman is Reality (absolute) or the One-and-only-Whole. Atman, as part of Reality, displaces Reality so that there is no Reality but rest of Reality; Reality is transcendent of Atman but is immanent in (or permeates) Atman, for Atman being part of Reality. And in being part, Atman carries the essence of both His or Her Self and Brahman as the one spirit at His or Her core (Atman’s); the Atman and Brahman are one in spirit. 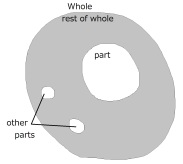 Anatman is translated “non-self”. I consider it the self or identity within our representational reality, which is a part projected through the Central Nervous System of our Whole. Our Whole Self is part-less and transcendent of our part as any whole is of their parts. This is because a part displaces the whole to leave the rest of whole, as indicated in the diagram.

In Hindu tradition Atman is similarly understood to be formless and part-less (ie. whole), whose true nature cannot be perceived. It is said that to comprehend the difference between Anatman and Atman, between our projected part and our Whole, is to become liberated.

There is the famous practice of the self talk “Neti, neti, neti” or “not this, not this, not this“. The idea of negating Anatman, itself being a negation or non-self (suffix an-), is to realise the supposedly permanent and unchanging Atman.

My recent approach repeats this negation but then refer indirectly to our transcendent Whole thus :
“Not this, not that, not us
Not that, not it, not me.
Everything is a part,
of my part-less Whole Being.”

Of Nothing we exist

Of Nothing we exist –
that Nothing is our Whole
absence in our part,
our part-less Whole.

Of Life we exist –
emergent of time
cosmos and Earth,
transcendent of our part.

Trust, be grateful –
He or She immanent in our part
our business, monies, questions and purposes,
in our being part.

Not this, not that, not us, as self or identity –
our everything is a part
of our part-less Whole Being,
next to other Wholes of Reality.